From Robotics
Jump to: navigation, search 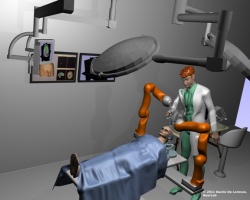 Project Description: The ACTIVE project exploits ICT and other engineering methods and technologies for the design and development of an integrated redundant robotic platform for neurosurgery. A light and agile redundant robotic cell with 20 degrees-of-freedom (DoFs) and an advanced processing unit for pre- and intra-operative control will operate both autonomously and cooperatively with surgical staff on the brain. As the patient will not be considered rigidly fixed to the operating table and/or to the robot, the system will push the boundaries of the state of the art in the fields of robotics and control for the accuracy and bandwidth requiredby the challenging and complex surgical scenario. Two cooperating robots will interact with the brain that will deform for the tool contact, blood pressure, breathing and deliquoration. Human factors are considered by allowing easy interaction with the users through a novel haptic interface for tele-manipulation and by a collaborative control mode ("hands-on"). Active constraints will limit and direct tool tip position, force and speed preventing damage to eloquent areas, defined on realistic tissue models updated on-the-field through sensors information. The active constraints will be updated (displaced) in real time in response to the feedback fromtool-tissue interactions and any additional constraints arising from a complex shared workspace. The overarching control architecture of ACTIVE will negotiate the requirements and references of the two slave robots. The operative room represents the epitome of a dynamic and unstructured volatile environment, crowded with people and instruments. The workspace will thus be monitored by environmental cameras, and machine learning techniques will be used for the safe workspace sharing. Cognitive skills will help to identify the target location in the brain and constrain robotic motions by means of on-field observations.

Project Description: MUNDUS is an assistive framework for recovering direct interaction capability of severely motor impaired people based on arm reaching and hand function. Most of the solutions provided by Assistive Technology for supporting independent life of severely impaired people completely substitute the natural interaction with the world, reducing their acceptance. Human dignity and self-esteem are more preserved when restoring missing functions with devices safeguarding self perception and first hand interaction while guaranteeing independent living. MUNDUS uses any residual control of the end-user, thus it is suitable for long term utilization in daily activities. Sensors, actuators and control solutions adapt to the level of severity or progression of the disease allowing the disabled person to interact voluntarily with naturality and at maximum information rate. MUNDUS targets are the neurodegenerative and genetic neuromuscular diseases and high level Spinal Cord Injury. MUNDUS is an adaptable and modular facilitator, which follows its user along the progression of the disease, sparing training time and allowing fast adjustment to new situations. MUNDUS controller integrates multimodal information collected by electromyography, bioimpedance, head/eye tracking and eventually brain computer interface commands. MUNDUS actuators modularly combine a lightweight and non-cumbersome exoskeleton, compensating for arm weight, a biomimetic wearable neuroprosthesis for arm motion and small and lightweight mechanisms to assist the grasp of collaborative functional objects identified by radio frequency identification. The lightness and non cumbersomeness will be crucial to applicability in the home/work environment. Specific scenarios in the home and work environment will be used to assess, subjectively and quantitatively, the usability of the system by real end-users in the living laboratory facility. 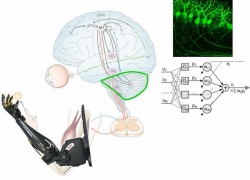 From neurophysiological innovative recordings of cerebellum (in vivo and in vitro), a detailed realistic neural network will be developed; a simplified real-time version of this network will be included and tested into the control loop of robotic arms (simulator and platform), exploring different possible roles played by the cerebellum during sensorimotor tasks.

Project Description: The brain circuits of the central nervous system are formed by neurons and synapses endowed with complex dynamical properties. However, the traditional architectures of computational systems, like artificial neuronal networks, are based on connectivity rules while making use of very simplified neurons. Moreover while brain circuits operate through discontinuous signal called spikes organized in complex sequences, theoretical analysis usually deals with continuous signals. To understand circuit computations a different approach is needed: to elaborate realistic spiking networks and use them, together with experimental recordings of network activity, to investigate the theoretical basis of central network computation. As a benchmark we will use the cerebellar circuit. The cerebellum is supposed to compare expected and actual activity patterns and to reveal their congruence with respect to stored memories. By these means, the cerebellum takes part to control loops regulating movement and cognition. Experimental evidence has revealed that cerebellar circuits can dynamically regulate their activity on the millisecond time scale and operate complex spatio-temporal transformation of signals through non-linear neuronal responses. Moreover, synaptic connections can be fine-tuned by distributed forms of synaptic plasticity, the correlate of memory in neural circuits. In this project, we will develop specific chips and imaging techniques to perform neurophysiological recordings from multiple neurons in the cerebellar network. Based on the data, we will develop the first realistic real-time model of the cerebellum and connect it to robotic systems to evaluate circuit functioning under closed-loop conditions. The data deriving from recordings, large-scale simulations and robots will be used to explain circuit functioning through the “adaptable filter theory”. REALNET will thus provide a radically new view on computation in central brain circuits laying the basis for new technological applications in sensori-motor control and cognitive systems.

Industrial robots are powerful and able to carry out many different tasks, they lack autonomy and adaptability, in a word freedom to perform at the best of their capability, without being told what to do. FIDELIO project is all about this: help robots gain freedom in order to be more flexible, autonomous, thus useful and effective.

Project Description: Modern industrial robots are complex and powerful machines, able to execute a variety of different tasks with high speed and accuracy. Nevertheless, they still have a low degree of autonomy and adaptability, and need the presence of a human operator to learn new tasks or tune existing ones.

In the last twenty years, however, robotic researchers have been focusing on the Learning From Observation paradigm, developing prototypic robotic systems able to observe and learn from human operations. In this new paradigm, the information coming from a variety of observations is analysed and transformed into an abstract representation of the task. By using such information, and exploiting the abstraction capabilities of a suitable cognitive system, the robot is able to autonomously generate a program to reproduce the task, even in an environment which is different from the one observed during the learning phase.

The FIDELIO project wants to investigate the feasibility (and the related advantages) of this innovative approach in an industrial application scenario, exemplified by a fixtureless wheel deburring task. To this aim, a robotised cell will be set up, composed of a six degree-of-freedom industrial manipulator and a workstation where aluminium wheels are placed for deburring. On top of the workstation a camera frames the workspace in order to localise the wheel. The arm is equipped with a pneumatic deburring tool connected to the robot end-effector through a force/torque sensor. In addition, an eye-in-hand camera, framing the cutting tool and the deburring edge, is mounted at the robot end-effector.

In the ROSETTA vision robot and human workers share the same workspace and tightly cooperate, without any protective safeguards. Active control of safety is pursued in the project, through supervision of the robotized cell, use of harmless lightweight kinematically redundant robotic arms, bio-inspired planning of motion for the robotic arms (human-like trajectories) and feedback control based on exteroceptive sensors

Project Description: ROSETTA (RObot control for Skilled ExecuTion of Tasks in natural interaction with humans; based on Autonomy, cumulative knowledge and learning) develops “human-centric” technology for industrial robots that will not only appear more human-like, but also cooperate with workers in ways that are safe and perceived as natural. Such robots will be programmed in an intuitive and efficient manner , making it easier to adapt them to new tasks when a production line is changed to manufacture a new product.

The project aims at supporting industry through developing technologies that make it easier to utilize and integrate industrial robots into otherwise manual assembly lines. Today’s market place is characterized by products that come in many variants and have short lifetimes. This calls for flexible manufacturing systems that allows for frequent product changes. Industrial robot automation is the automation method of choice to meet with those demands, however, the application requires the ability to adapt even more quickly to new tasks. Further, it is desirable to integrate the robots with humans in the assembly lines in order to achieve highest possible level of flexibility while utilizing the individual strengths of both human worker and the robot.

The project addresses the above challenges by developing methods and tools to engineer and program robot stations in ways that are more intuitive and closer to the task, while still staying less specific to the installation. This requires a higher level of autonomy from the robot in terms of adapting to a changing environment and interacting with the human workers.

Another aspect of concern when integrating industrial robots into manual assembly is the safe interaction between robot and human. In the ROSETTA concept the robot is not necessarily separated from humans by any physical safety fences or barriers. This implies that the robot needs to be safe towards the human either by being intrinsically safe or by employing active safety systems. The primary robot used for exemplifying the ROSETTA project will be the intrinsically safe concept robot FRIDA from ABB, along with other arms both intrinsically safe and with fencing. Different robot arms will be used in order to show that the concepts for task instructions, task execution and safety that are being pursued by the ROSETTA project can be generalized and is applicable to different platforms. 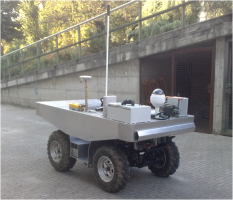 A commercial ATV is used to develop an All Terrain Mobile Robot. It is equipped with all the required sensors and actuators in order to be autonomous.

Project Description: The popularity of the research of the unmanned ground vehicles has been increasing recently due to their usefulness in different operation environments. Planetary explorations, search and rescue missions in hazardous areas, surveillance, humanitarian demining, as well as agriculture applications such as pruning vine and fruit trees, represent possible fields of using autonomous vehicles in natural environments. Differently from the case of indoor mobile robotics where the exclusively flat terrain is considered, the outdoor robotics deals with all possible natural terrains. The unstructured environment and the terrain roughness including dynamic obstacles and poorly traversable terrains pose a challenging problem for the autonomy of the vehicle.

The advantage of using high speed All-Terrain-Vehicle, is its good traversability potential for some poorly traversable terrains and the short time spent for reaching the goal as well as operating in some unsafe environments comparing to other kind of existing vehicles. The main disadvantage of the ATV is its low level stability margin due to its dynamic constraints, roll-over and excessive side slip.

The main objectives of the QUADRIVIO project are to develop:

Project Description: Project European Robotic Surgery (EuRoSurge) is a Coordination and support action.
This Coordination Action aims at developing a conceptual integration platform for Computer and Robot Aided Surgery (CRAS) research and manufacturing, based on the following actions: